Importance of capturing in RAW format

The photographer then downloads the RAW photographs from the memory card. The image is then tweaked to get the desired white balance, contrast, exposure, saturation, color, sharpness, lens correction, and so on. One of the most recent additions is the ‘Dehaze’ option in Lightroom when editing, which is quite handy. The ultimate output of a picture is determined not only by the image that is acquired but also by the editing abilities of the user.

It is worth noting that the size of a RAW format image is significantly larger, nearly double that of a high-quality JPEG image. The size of the JPEG image is determined by the type of JPEG format used while capturing the image.

When do I capture images in RAW format and in JPEG?

Here’s an example: in the above image, the foreground seemed dark and was subsequently modified by raising the shadows to be in details. The same is true for the backdrop sky, which was blown out in the original photograph. However, because it was captured in RAW format, I was able to retrieve the information from the sky region by reducing the shadows. You may do the same with JPEG photos, but the image quality suffers as a result. It will also be unsuitable for professional use. Note that the above image was captured after the sunset and the actual image appeared dark.

How to edit RAW format images?

The RAW format image always appears dull and is an incomplete image. It has to be processed using a photo editing software like Adobe Lightroom or Photoshop or other image editing software. Note that the RAW format images are not supported by the websites and has to be converted to JPEG or PNG format. I would highly recommend to super compress if it is for websites so that the image can load fast. By the way, you can go through my courses to know more on how to edit using Lightroom.

Subscribe to my blog and Youtube channel. Hope you enjoyed reading this blog post. Buy me a coffee to support my work or you can go to my store to buy some of my images. Also, do not forget to join my FriendZone by signing up for my newsletter. 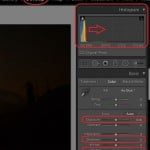