Captured this at Surathkal Beach or the NITK beach, late in the evening at around 8 PM once the place was deserted. It’s common to find images of beaches that were captured during the daytime, but capturing an image at night takes a bit of patience and time. You need to wait so that it’s dark around with no people around. Also, there is a risk of you being robbed as you are alone with your expensive gadget. But to get those best shots, you need to put in some effort.

This is a long exposure shot of sea waves which has a silky effect. The sky full of stars appears purple because of the industrial light. The sea waves appear more like mist or cotton. You can even capture images of the star trail. When the sea waves go back, capture the photo to get that silky smooth thread-like image. These waves will make the beach photos at night appear stunning.

To make it more interesting it’s good to add something in the foreground instead of just the waves like a stone or a boat etc. You may try to light up the foreground subject a bit using a handheld torch or an external flash. Remember to carry your tripod when capturing long exposure shots of this kind else you will end up getting blurred, shaky images. Low light can introduce noise. So, don’t increase the ISO to a very high value, it again depends on your camera sensor.

Gadgets used in capturing the above image include Nikon D610, Nikon 50mm f/1.4 D, Nikon 14-24mm f/2.8, Manfrotto Tripod, Wireless Trigger. You may try some of the latest cameras that are available in the market as Nikon D610 was the last in that series. 50mm f1.4 lens is one of the best investments and I would recommend that lens be your first lens to buy if you are serious about photography.

Place your tripod in a steady position and adjust the levels. Keep the aperture wide open and a shutter of about 20 to 30 secs. Keep the ISO as low as possible. You might need to increase the ISO if it’s totally dark. With better cameras increasing ISO should not be a problem. I tried to keep it as low as possible as there was moonlight, light from the lighthouse, and industrial light (light pollution) from the nearby refinery.

See that you click on the shutter button when there is an approaching wave so that in the 20 to 30 secs duration there should be one or more waves that come to the shore and then leave the shore again. This is how you get the soft silky, cotton effect and the white waves. Use a remote trigger or a wireless trigger or self-timer to see that there is no camera shake of any kind. Also, with this exposure, it is enough to get stars in the dark sky. You may even try to get a few galaxy shots where there is no light pollution.

Leave a comment below if you have more ideas. Buy me a coffee to support my work or you can go to my store to buy some of my images. Also, do not forget to join my FriendZone by signing up for my newsletter. Consider subscribing to my YouTube channel. 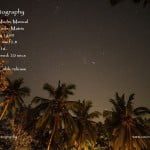 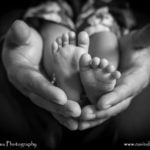 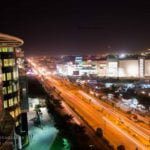 Capture impressive Cityscape during Nightfall that Stands Out